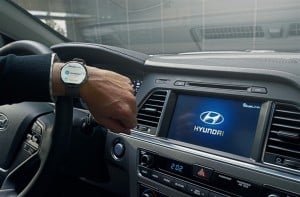 April was “National Distracted Driving Awareness Month” which was also the debut a new form of distraction while driving, smartwatches including the Apple Watch. So far there are a limited number of car related Apple Watch apps that start cars and remind or pay for parking. The real danger is when a driver is using the smartwatch to look at notifications and communicate. Just before the Apple Watch was launched a lawsuit was filed in the Los Angeles Superior Court against Apple, Samsung, Google, and Microsoft for a billion dollar program to educate drivers about the dangers of using smartwatches while driving.

The Coalition Against Distracted Driving(CADD) represented by attorney Stephen Joseph filed the complaint on April 18. CADD is a Los Angeles-based group formed to “promote effective and ongoing public education about the risks of using mobile devices while driving.”

Attorney Jospeh is “acting in this case in the public interest” while recognizing “potential injury to himself caused by the possibility of being hit by a driver who cannot see the road because he or she is using a smartphone or smartwatch,” the suit states.

Driving while using smartphones is dangerous and smartwatches can be more dangerous, reports the lawsuit.

Looking at notifications from smartwatches “creates a far greater distraction than smartphones” because it is more difficult to ignore notifications, given that the device is strapped to one’s wrist, the suit states. The temptation to view the notifications is “irresistible” and  while looking at smartwatch “the road becomes invisible to the driver.”

The $1 billion cost of a national education program, “is a tiny fraction of profits that defendants receive from the sale of smartphones and smartwatches,” the suit states.

The suit argues that smartwatches with smartphones are nuisance while driving and the companies fail to issue warnings. A new ruling found that nuisance cases could be brought “to make such criminal activity … less likely through the imposition of operating conditions.”

The Transport Research Laboratory in Wokingham found a driver reading a message on a smartwatch takes 2.52 seconds to react to an emergency action, such as a pedestrian walking out in front of them. A driver talking to their passenger took just 0.9 seconds, while a driving using a handheld phone took 1.85 seconds.

Some analysts contend that smartwatches should have driving mode similar to airplaine mode to cut off functions while driving.

It is not clear yet, if drivers looking at their smartwatches can be cited for distracted driving. What is clear is that it can be dangerous.