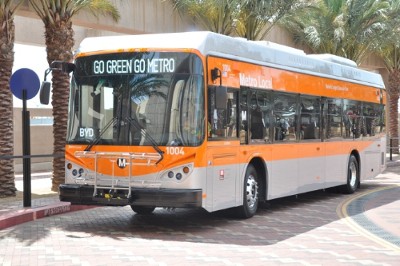 Buses and taxis emit nearly 30% of the world’s harmful emissions, yet only account for 1.7% of total vehicle ownership. The new BYD buses have zero emissions.

Los Angeles Metro will test the first five electric buses on routes around the city. The 40-foot buses are built  BYD Motors, and drive more than 155 miles on a single charge.

BYD’s Battery Electric bus is based on research from 15,000 R&D engineers including the BYD Iron-Phosphate battery which has 12-year-battery warranty.

BYD electric buses are quiet and comfortable without vibrations, jerks or the noise associated with the conventional buses and combustion engines.

BYD Motors established its headquarters in downtown Los Angeles in October 2011 and has now hired over 160 Americans to support BYD Electric Bus and Energy Module factories in Lancaster, California.  BYD a subsidiary of BYD Company Ltd, the largest domestic auto-manufacturer and electric-bus manufacturer in China.