Chevy announced that it will celebrate freedom over Independence day by reducing the price of 4G LTE Wi-Fi hotspots by as much as 50%.

In the two years since it’s introduction Chevrolet customers have used more than 3 million gigabytes of data – the equivalent of streaming more than 100 million hours of music – and Chevy in-vehicle data usage continues to trend upward.

A 4G LTE connection comes standard on all new Chevrolet retail models with the OnStar Basic Plan, which also features remote vehicle access and the AtYourService marketplace via the myChevrolet mobile app.

The new data pricing is a 50 percent reduction for most plans with the all-new 4 GB monthly plan representing four times the amount of data available previously for $20 per month.

The direct pricing appears to be cheaper than going through AT&T. We have contacted Phil Colley at OnStar and an AT&T rep to find out when/if AT&T has reduced prices for Wi-Fi Hotspots.

GM OnStar Wi-Fi hotspots have been tested to be very fast. When we tested a Chevy Volt with 4G LTE with download

The Wi-Fi signal is better when you are not in a garage or underground.

“Wireless connectivity has proven to be a beneficial technology for many Chevrolet customers, from contractors who use their Silverado as a mobile office to families using their Suburban on a summer road trip,” said Sandor Piszar, Chevrolet truck marketing director. “As our customers increase their usage of the technology, we are able to make it more affordable for them.” 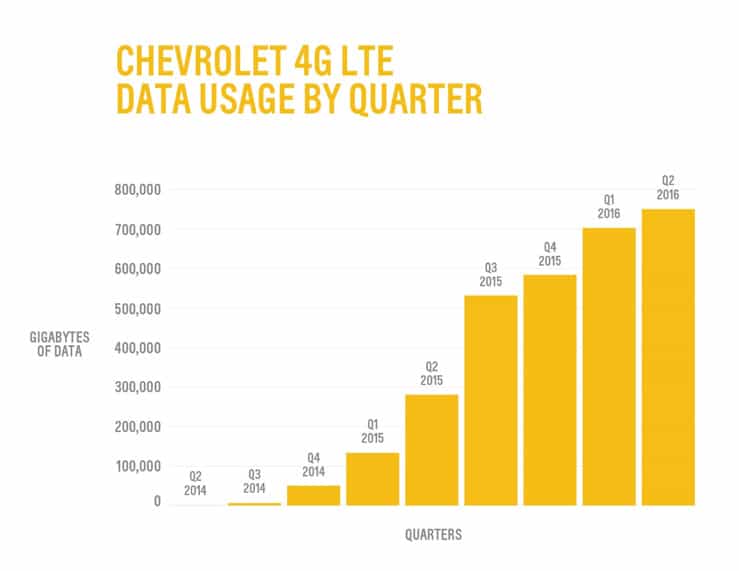 More than 60 percent of Suburban owners and passengers use their OnStar 4G LTE Wi-Fi hotspot, with Tahoe and Traverse hotspot usage not far behind. Not surprising when you consider those vehicles are typically for families and you can connect up to seven devices to the hotspot. The high-volume Silverado accounts for the largest amount of data usage, with customers consuming more than 1 million gigabytes of data to date.