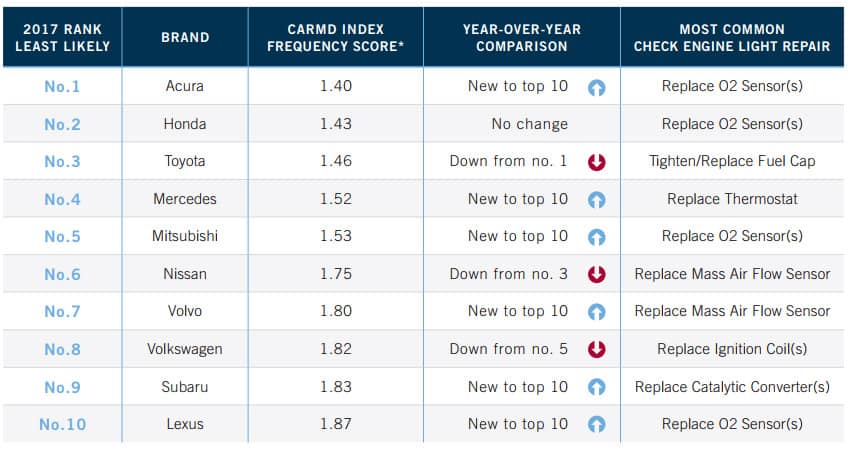 CarMD.released its 2017 CarMD® Vehicle Health Index™ Make and Model Reliability Rankings. These rankings are part of our Top Best Vehicles of the Year in Review roundup.

Acura was the brand least likely to need check engine repairs over the past year, edging out Honda and Toyota, which rank no. 2 and no. 3 respectively.  For the second consecutive year, Hyundai is the brand with the lowest average repair cost ($306), followed by Mazda ($310) and Kia ($317). Volkswagen is the only brand to rank in the top 10 on both lists. The 2013 Honda Civic is least likely to need check engine-related repairs.

At least 10 percent of the cars and trucks on the road in the U.S. have a check engine light on at any given time, but which brands are least likely to need check engine repairs?  To rank these makes, CarMD developed a formula that accounts for those with the lowest percentage of repair incidents per percentage of vehicle population. Based on this data, an Index frequency score is assigned. The lower the score the higher the vehicle make ranking. CarMD found the following brands were least likely to need a check engine repair over the past year:

CarMD found that the 10 brands with the lowest average check engine light-related repair costs in 2017 were as follows:

Any given brand can have a mix of very reliable vehicles along with some that are inherently known to have more frequent issues. For this reason, our Index drills down to rank vehicles by year, make and model.

When the check engine light comes on, here is the list of the 10 vehicles with the lowest average repair costs among the 8,900 different year, make and model vehicles analyzed by CarMD over the past year:

Many drivers are surprised to learn that a loose, damage or missing gas cap is one of the most common check engine light triggers, which is the case with the 2012 Mazda 5 and the 2014 Kia Forte. Vehicle owners whose vehicles have a high percentage of finicky gas caps often have lower average repair costs, but spend time getting it diagnosed nonetheless.

Published annually since 2011, this Index analyzes check engine repairs and costs to rank the 10 brands and 100 vehicles least likely to have a check engine light on, 10 makes and 100 vehicles with the lowest average repair costs and top three vehicles by category. CarMD analyzed over 4.2 million real, in-use vehicles – model year 1996 to 2017 – reporting check engine health from Oct. 1, 2016 – Sept. 30, 2017.

About CarMD
Based in Irvine, Calif., CarMD is a leading provider of on-board diagnostic (OBD2)-related data, APIs and products designed to lower the cost of vehicle ownership. CarMD’s nationwide network of technicians has built the most comprehensive database of verified OBD2-related repairs and associated costs from which it draws the Vehicle Health Index, and supports its products and services.