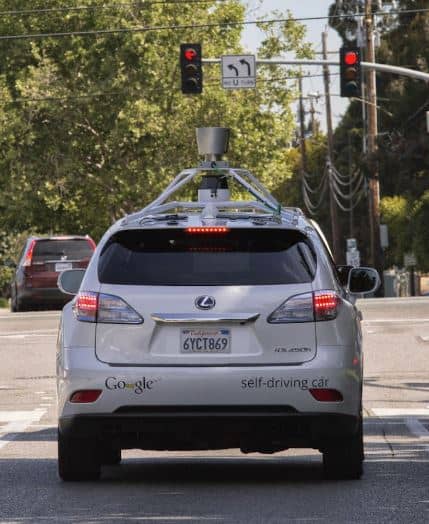 Consumer WatchDog is watching out for the safety of other drivers on the road encountering self-driving vehicles in California. The group is following up on our question we asked when the first accidents occurred, “They have cameras on the cars, why don’t they have to show video footage of what happened?” Consumer WatchDog also wants the data to be given to the DMV in cases of accidents and to have police reports filed.

Consumer Watchdog  formally petitioned the California Department of Motor Vehicles to amend its driverless car testing regulations to require that police investigate any accidents involving robot cars, as well as  require copies of any video or  data gathered by the robot vehicle related to the crash be provided to the department.

Currently, a company whose robot car is involved in an accident must report the incident to the department within 10 days. There is no requirement that police investigate the accident.

“Under the current regulations, the Department relies completely on the testing company’s account of what happened.  With the public’s safety at stake, it’s imperative that a neutral third party investigates any accident involving a robot car,” wrote John M. Simpson, Consumer Watchdog’s Privacy Project director, in the petition to the DMV.

“Immediate action is needed to ensure that any accidents involving autonomous vehicles will be reported in an unbiased way,” wrote Simpson. “Understanding what went wrong when there are the inevitable robot car crashes is essential to developing necessary regulations for the vehicles.”

The DMV has 30 days to respond to Consumer Watchdog’s petition for the rulemaking.
The petition proposes amending the accident-reporting rule by inserting the underlined, italicized words to read:

§ 227.44. Reporting Accidents.
A manufacturer whose autonomous vehicle is in any manner involved in an accident originating from the operation of the autonomous vehicle on a public road that resulted in the damage of property or in bodily injury or death shall immediately report the accident to the police and request an investigation of the accident. In addition to the police report of the investigation the manufacturer will report the accident to the department, within 10 days after the accident, on Report of Traffic Accident Involving an Autonomous Vehicle, form (OL 316 (NEW 9/2013) which is hereby incorporated by reference. The manufacturer shall identify on the form, by name and current address, if available, all persons involved in the accident, and a full description of how the accident occurred. In addition the manufacturer will provide the department with copies of any video and recorded data related to the accident.