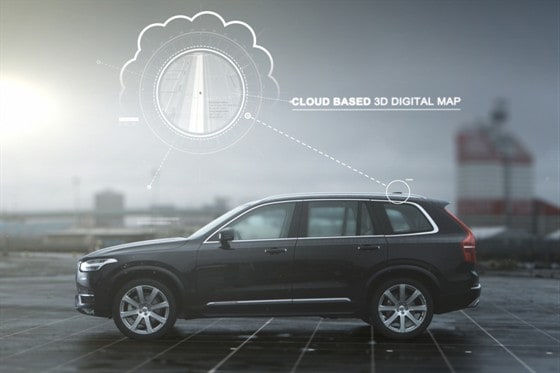 Volvo Cars announced how its Drive Me autonomous car program will deploy 100  people in self-driving Volvos on some roads around in Gothenburg by 2017.

The combination of many technologies will help drivers on long commutes get work done, save gas, make for better traffic flow and lead the way for more cost-effective urban planning.

Volvo Cars has designed a complete Drive Me driving system, using a network of sensors, cloud-based positioning systems and intelligent braking and steering.

Volvo offers holistic approach to autonomous driving. In a news conference, today, Dr Erik Coelingh, Technical Specialist at Volvo Cars said it is easy to create a show self-driving concept car (implicating the Mercedes-Benz at CES), however, it is much more difficult in real-life situations. The car must see, decide, act on its own.

Several components have to combined for exceptional situations, through team work of complex network of sensors, cloud-based positioning systems and intelligent braking and steering technologies. The systems have fall-back backup functions, if one feature fails or if there is critical issue. If something goes wrong the driver will takeover, if the driver does not take over the car will find a safe place to stop.

Volvo Cars Drive Me has a complete 360° view of the car’s surroundings through multiple radars, cameras and laser sensors. Exact positioning is based on this surround information together with GPS and a high definition 3D digital map that is continuously updated with real-time data.

After combining the information from the sensors and the map, the Drive Me car is able to choose the best course in real-time, factoring in variables such as the curvature of the road, speed limit, temporary signs and other traffic.

he cloud service is connected to the traffic authorities’ control center, so that the most up-to-date traffic information is always available. The control center operators also have the ability to tell the drivers to turn off the autonomous drive mode if necessary.

The combined 76 GHz frequency-modulated continuous wave radar and camera placed in the windscreen is the same as that in the all-new Volvo XC90 with City Safety.

City Safety is a winner of the Tech CARS Awards.

The public pilot, one-of-a-kind collaboration between legislators, transport authorities, a major city and a vehicle manufacturer, is a central component of Volvo Cars’ plan to achieve sustainable mobility and ensure a crash-free future.