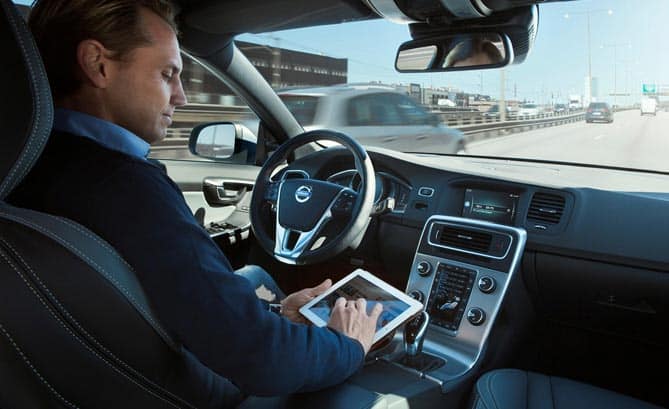 If and when connected cars become auto-piloted, how will insurance work and who or what will be financially responsible for “accidents” in driverless cars?

Volvo Stands by Its Driverless Drivers

Volvo’s Anders Eugensson told CNET that when  an auto piloted “Drive Me” Volvo is being manually driven, the driver will be at fault in an accident. However if the car is in autonomous mode and it causes a crash, Volvo will take responsibility. Volvo wants to ensure that by 2020 that not a single Volvo owner will be killed or seriously injured worldwide.

Insurance Agents May Have Too Much Data

Meanwhile, according to Insurance Journal the insurance industry is having a tough time trying to figure out to ensure autonomous cars. The problem could be too much data that is exceedingly complex to interpret.  One auto-piloted car could generate 750MB of data. Then the actuary will have to figure out “predictive variables”. On top of that there are state regulations such as the state of California regulates factors insurers must use. If autonomous cars do prove to be safer, they may have reduced auto insurance rates.

autonomous driving is not perfect.  Recently during a Google autonomous test drive a reporter noticed that when a large tuck started edging in the lane from the left, the Google car jerked left, almost entering in the left lane. It seemed to drive like grand parents.

Although a JD Power survey showed some people are will to pay for self-driving cars, the cons include expensive technology, infrastructure support and a disaster could occur if any computer in the network shuts down or has problems.

Then computers may be create more problems, it may be programmed that when given the choice of running into a wall that would kill two passengers in a mini van and a school bus, to choose the wall.

Another problem could be the person city in the driver seat may be sleep, reading a book or surfing the web and not notice the robotic driver disengaged.

Do Driverless Cars Need New Laws or a Lawyer?

We may not have for laws to be passed our legal systems are designed to deal with liability through precedent.  Liability may be determined by the courts, attorney John Villasenor, wrote in a Brookings paper.

The legal precedents established over the last half a century of products liability litigation will provide manufacturers of autonomous vehicle technology with a very strong set of incentives to make their products as safe as possible. In the overwhelming majority of cases, they will succeed. However, despite these efforts, there will inevitably be some accidents attributable in whole or in part to defects in future vehicle automation systems. While this will raise complex new liability questions, there is no reason to expect that the legal system will be unable to resolve them.