Ranging from 18 to 19 and even 32 cup holders for future cars—where are the most and best cup holders in cars, minivans, nanovans and SUVs? This article describes the future of cup holders as well as aftermarket adaptations.

The Japan Automobile Manufacturers Association, Inc. will hold the 45th Tokyo Motor Show 2017 this week. It is important for American car buyers and automakers

This month, Subaru of America, Inc. will host its “Subaru Loves Pets” initiative with the help of the American Society for the Prevention of Cruelty

Fuji Heavy Industries (FHI) maker of Subaru automobiles, and IBM Japan have partnered to collaborate in the development of a system to analyze images from

ADAS features are saving lives and preventing accidents. In fact, some could say that this kind of safety provides extra EyeSight. Subaru EyeSight was developed

Subaru revealed how their new STARLINK infotainment and safety system will work on new 2016 models. The the new infotainment system and apps are being shown at the New York Auto Show. Subaru also released a demonstration video on YouTube (video follows).  In January, Subaru announced that it partnered with SiriusXM  for Subaru STARLINK in-vehicle infotainment connectivity and services including 4G LTE connectivity.

There are interior roof-mounted buttons similar to OnStar buttons where a STARLINK advisor can give help in an emergency or call for roadside assistance.

When an airbag is deployed, the system will connect the driver to a STARLINK advisor. The advisor will ask if the driver is okay. If the driver does not respond the advisor will send emergency responders. Drivers can call for assistance in a non-crash emergency such as a medical condition by pressing the SOS button.

The driver can press a roadside assistance button then the STARLINK’s GPS system locates the vehicle and sends a tow truck.

STARLINK automatically checks critical vehicle systems and sends an email alert in the event of an issue. The driver is notified of the nearest Subaru dealership and receives a monthly vehicle health report via email.

STARLINK allows the user to connect to unlimited entertainment apps such as Pandora, iHeartRadio and Aha.

STARLINK can be activated with voice commands for music and navigation.  The navigation system can deliver live traffic alerts. The touchscreen displays text messages and can turn them into audio.

Via an app or web connection STARLINK will show the driver exactly where the car is located. (This is like the OnStar vehicle locator app we reviewed earlier).

The driver through the app can turn on the horn and lights to help find the car in a parking lot or dark location. The app can also remotely lock and unlock the Subaru.

According to Subaru’s website, the current version of STARLINK works through a USB port for iPhones or a Bluetooth connection for Android smartphones. Music streaming apps use the data on the connected smartphone or iPhone. We suspect that 2016 system may use the smartphone data plans, also.

Typically automakers include a free trial period of vehicle services from six months to a year. OnStar basic service with remote start is free for 5 years with the purchase of a new GM or Chevy vehicle. We would expect a similar deal from Subaru. There is no announcement yet for pricing of 4G LTE connections, however we think there might be be an additional fee on shared data AT&T data plans or data may be purchased through the STARLINK infotainment system. 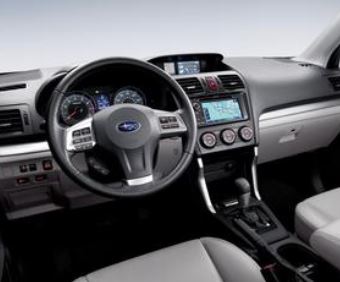 Subaru announced partnerships with Sirius XM  and AT&T for its Subaru STARLINK in-vehicle infotainment connectivity and services including 4G LTE connectivity. STARLINK is the Subaru in-vehicle