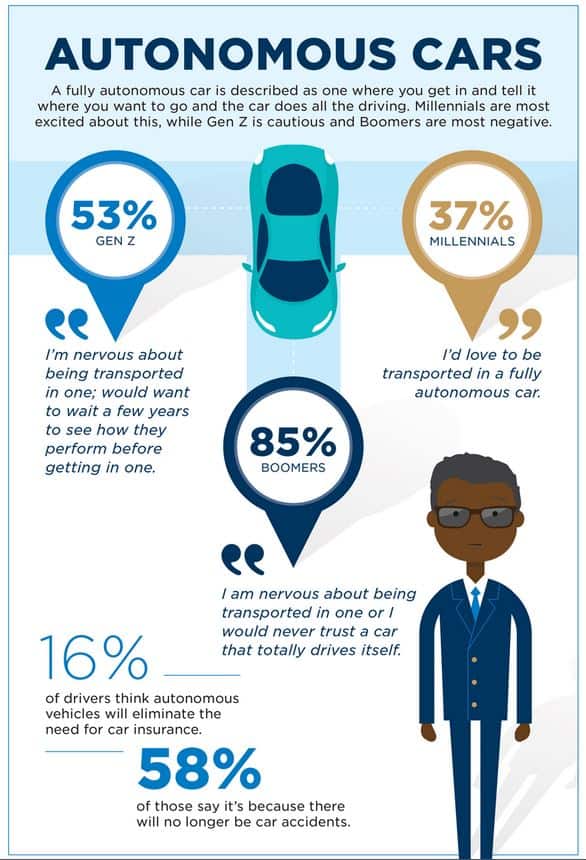 A national survey of more than 2,000 U.S. residents across four generations reveals some surprising differences toward cars and driving. Erie Insurance commissioned the survey to understand attitudes among a segment of Gen Z (14- to 17-year-olds); Millennials (18-34); Gen X (35-50); and Baby Boomers (51-69).

Hesitant to Switch to Auto Pilot
Millennials were most likely to agree to riding in a self-driving car (37 percent), compared to only 15 percent of Baby Boomers. However, neither group said they would fully trust a car that drove itself. Nine percent of respondents think self-driving cars will eliminate car accidents all together. There’s still a little road left to travel on the idea of self-driving cars. 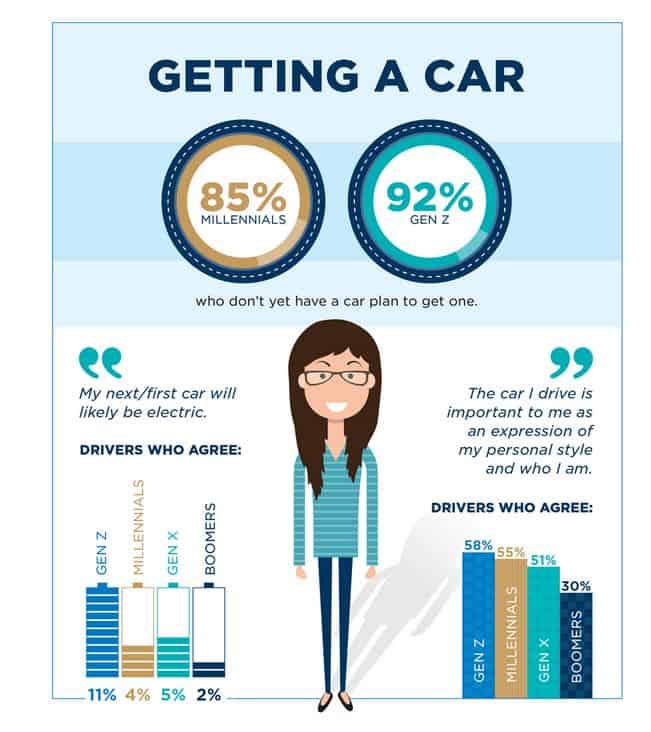 Younger generation excited about driving
While some research has shown a declining interest in driving, ERIE found that 89 percent of 14- to 17-year-olds who don’t yet have a driver’s license plan to get one, and of those, 96 percent are excited about learning to drive. That mirrors the response from Baby Boomers when asked to look back on the time when they began driving. The survey also found that 85 percent of Millennials who don’t yet have a car plan to get one.

“What this tells us is that while there has been some societal shift away from cars, they remain a central part of people’s lives,” said Jon Bloom, vice president of personal auto, Erie Insurance. “Many think Millennials don’t care about cars. Our research suggests otherwise.”

Unfortunately, unsafe driving practices continue
The survey revealed some alarming and unsafe behaviors. When asked about texting while driving, 6 percent of drivers said, “It’s no big deal; I do it all the time.”

And, while experts say it’s never safe to text and drive, almost a third of drivers (31 percent) disagree, saying they sometimes do it when they feel it’s safe. Millennial drivers are most likely to say this (44 percent); followed by Gen Z (40 percent) and Gen X (35 percent). Baby Boomers were the least likely to feel this way (13 percent).

Interestingly, the data suggest that young people change their attitudes toward texting and driving once they actually start driving. Among Gen Zs who don’t yet drive, 28 percent say they would sometimes do it when they felt they could do so safely, but once they start driving, that number jumps to 40 percent.

Sixteen percent of drivers think autonomous vehicles will eliminate the need for car insurance. More than half (58 percent) say it’s because there will no longer be car accidents.

Methodology: The survey was conducted by Falls Communications on behalf of Erie Insurance from Sept. 28 – Oct. 26, 2017 among 2,147 U.S. residents ages 14-69. ResearchNow (Plano, TX) administered the survey, via the internet, to its captive U.S. panels. While different sample sizes have different margins of error, the estimated margin of error for the sample size of all 2,147 respondents is +/- 2.1 percent.