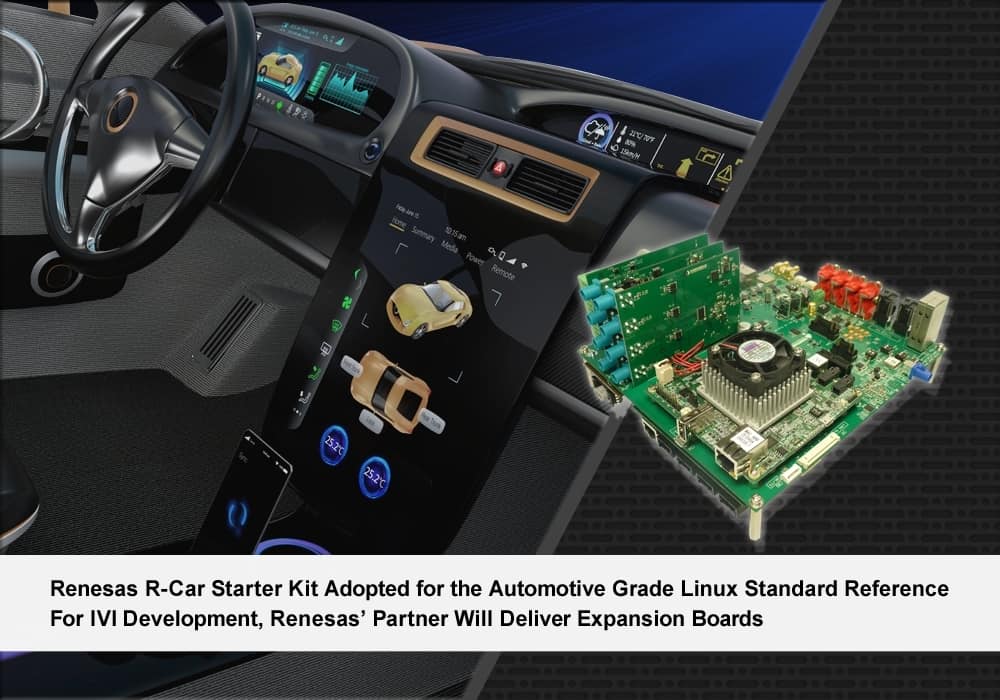 Renesas Electronics announced that Automotive Grade Linux (AGL) has adopted the Renesas R-Car Starter Kit as one of its standard reference platforms for software development. AGL is a collaborative open source project that is bringing together automakers, suppliers and technology companies to build a Linux-based, open software platform for automotive applications that can serve as the de facto industry standard. Its adoption of the Renesas R-Car Starter Kit makes it easy for software developers to acquire the hardware environment that runs software developed by this project and allows them to quickly and easily develop in-vehicle infotainment (IVI) application software for next-generation connected cars.

In addition, two IVI development expansion boards from a Renesas partner (Note 2) that can be used with the R-Car Starter Kit will be available in July 2017. The standard expansion board includes multiple displays and a wide range of network interfaces and the advanced model provide interfaces that can be expanded to up to eight channels of camera input as well as high-speed/large-capacity storage.

Renesas will participate as a gold sponsor, in the Automotive Linux Summit (ALS) to be held from May 31, 2017 at the Tokyo Conference Center. In addition to an exhibition of the latest AGL development environments, Renesas will demonstrate its state-of-the-art connected car cockpit that connect to cloud IT services.

Containers are a type of virtualization technology that are incorporated into systems where they are combined with the execution environment that the applications require. This technology has received much attention in recent years from the IT industry since it can significantly reduce software management costs.