The firm also discovered that Apple is spending large research dollars on automotive as much as 4.7 billion dollars.Some analysts believe that the bulk of the spending is for shared Mobility with a market of 2.6 trillion dollars

Apple spending on automotive research is more than their watch, iPad or iPhone. It represents a larger investment than what the top 14 automakers are spending combined

Fred and Paul Jacobs have also unearthed some interesting information about the connected car space.

While only 4% of respondents use a smartwatch 64% connect their phone to the car radio. 91% of the media consumed is radio. 9 out of 10 listen to AM FM radio every day in the car well 3% listen to music from their phone and 3% use Pandora.

Radio listeners are not keen about autonomous cars. 16% like the idea 7% are enthusiastic 24% need more information while a total of 54% are “not sure” “against”vehemently against. It it is interesting that radio people are concerned about Apple’s plans to invest in a car.

While 9 out 10 new car buyers say it is very important that it has an AM/FM Radio, only 16% said Apple CarPlay and Android Auto are “very important. Smartphone connector at 66% was directly followed by Bluetooth at 62%. Even though Hyundai has stopped putting CD players in their cars still 51% want a CD players. A wireless Internet connection is “Very Important” to 32% of new car buyers. 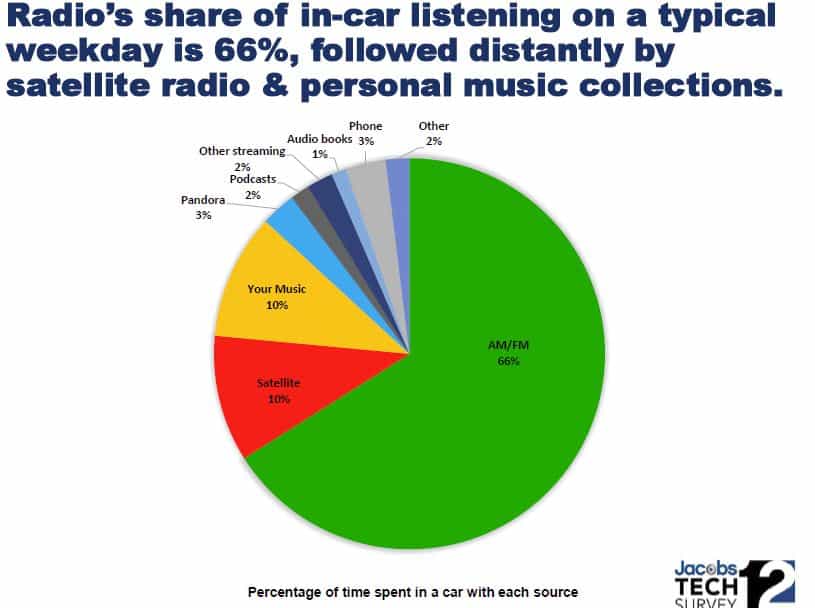 Apple may see the car as part of its ecosystem. There could be a time in the future when Apple makes a car that is connected to your iPhone, to your iPad, and to your MacBook Pro, while you are being driven somewhere. There could be no radio either am or FM in the car, just Apple products. You most likely will be able to listen to iTunes and perhaps watch Apple TV if the car is doing the driving

I recently completed a review of Apple CarPlay. Although it is not as easy to use as an AM FM radio it’s getting very close. The more people depend on their smartphones the more likely that they will use them in their cars. In fact, the Jacobs discovered quite a bit of smartphone addiction with more than one-third or addicted to their mobile phone especially women and Millennials.

Jacbos TechSurvery12  found that one fifth drive a car with an in-media system like Ford SYNC or Chrysler UConnect. They will also be offering a webinar on Android Auto and CarPlay.