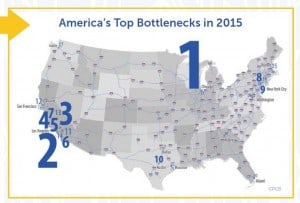 If you were stuck in Thanksgiving traffic, that’s what all traffic in the future will be like if Congress doesn’t take action. The American Highway Users Alliance identified America’s 50 worst bottlenecks and reported that the very worst bottleneck is in Chicago, IL. Los Angeles, CA owns the next six of the top 10. The bottlenecks are rated according to time of delay. HERE GPS information contributed to the report.

If you are choking in traffic you can complain with the Building America’s Future created free mobile app, I’m Stuck, for citizens to directly ask their Member of Congress to address  gridlock. To let Congress know you want them to take long-term action to fix it.

Bottlenecks not only frustrate and anger drivers and diminish our quality of life, but also harm the environment, increase the costs of goods and  services, and make roads more dangerous.

The report notes that ways to fix the problem are to improve mobility to increase investment in infrastructure and technology throughout the nation. Truck travel will increase at double the rate of passenger vehicles. 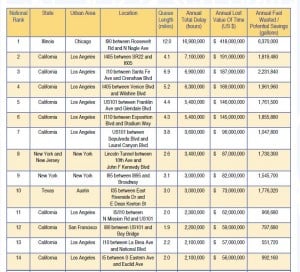 The study’s top 50 list includes trouble spots in the following Metropolitan Areas: 12 in Los Angeles, 9 in and around New York City, 3 in Chicago, 3 near Washington DC, 3 in Houston, 3 in Boston, 3 in Dallas, 3 in Miami, 2 in Atlanta, 2 in Philadelphia, and 2 in San Francisco/Oakland.

Even though the 405 was widened and closed down for “Carmageddon” the 405 is ranked in # 2 and 4 (405 between Venice and Wilshire Blvd that was widened recently). The Los Angeles region had far more top bottlenecks than any other metropolitan area, claiming the 2nd through 7th worst spots, as well as the 11th, 13th, 14th, 29th, 30th and 40th. LA’s worst was the 405 between SR22 and the 605 where the annual cost of delay exceeded $190 million, wasting 1.8 million gallons and 36.7 million pounds of CO2, with daily backups over 4 miles long.

Surprises included Austin breaking into the top 30 list at number 10, and Norfolk, VA and Tampa, FL — places that one might not expect to compete in the big leagues of bottlenecks – coming in at 38th and 45th, respectively.

In the top-ranked Chicago chokepoint, on the Kennedy Expressway (I-90) between the Circle Interchange (I-290) and Edens junction (I-94), the bottleneck was found to extend 12 miles, costing motorists 16.9 million hours’ worth of time, equivalent to $418 million in 2014. More than 6.3 million gallons of fuel is wasted on I-90 while cars idle or crawl in traffic. By just fixing America’s worst bottleneck, an annual reduction of 133 million pounds of carbon dioxide emissions would also be likely, the study found.

Fixing the top 30 bottlenecks alone would, over 20 years:

Also breaking into the top 10 was New York City with the 8th and 9th worst bottleneck at the notorious Lincoln Tunnel and on I-95 from Manhattan across the Bronx. Metropolitan New York also had the 18th, 19th, 21st, 31st, 33rd, 37th, and 42nd – ranked chokepoints.

The report notes that bottlenecks can be fixed and points to specific chokepoints that have been addressed and, as a result, were not included in the rankings. Projects cited include the Woodrow Wilson Bridge replacement on I-495 in the Washington, DC area, the Marquette Interchange in Milwaukee, and the Katy Freeway reconstruction in Houston. Read full report.