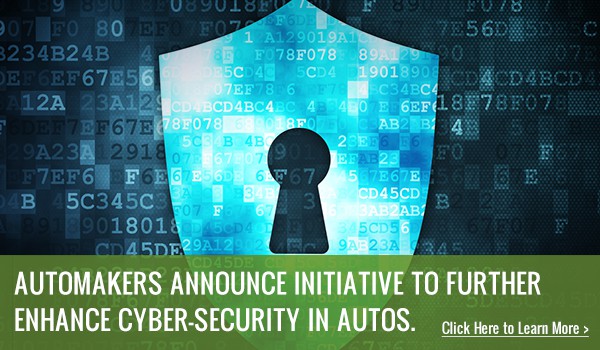 At the 2015 SAE Battelle CyberAuto Challenge automakers announced an added layer of cyber protections by launching an Auto ISAC that will serve as a central hub for intelligence and analysis, providing timely sharing of cyber threat information and potential vulnerabilities in motor vehicle electronics or associated in–vehicle networks.

The Alliance and Global Automakers announced that they began work to enhance the industry’s cybersecurity posture by working collaboratively to develop a voluntary Information Sharing and Analysis Center – or ISAC.

The specifications for the ISAC needed for the auto sector are completed.

There will be an added layer of cyber protections with Auto ISAC that will serve as a central hub for intelligence and analysis, providing timely sharing of cyber threat information and potential vulnerabilities in motor vehicle electronics or associated in–vehicle networks.

The Auto ISAC is expected begin operations late this year.

At first, automakers from around the world will receive the threat information distributed by the Auto ISAC.

The Auto ISAC will eventually expand to include auto suppliers and, over time, could also include strategic partners, such as telecommunications providers and technology companies.

Following a competitive bidding process during which multiple bids were received, Booz Allen Hamilton was selected to work with Members from the Alliance and Global Automakers to identify the structure, scope, governance, operating procedures and policies for the Auto ISAC.

Booz Allen Hamilton is a leading technology consulting and engineering firm with deep roots in cyber and national security.

Robust security best practices are necessary to maintain secure crash avoidance and driver safety systems from inadvertent or malicious tampering. It is an important way to help ensure that each system will respond properly when needed.

In November 2014, Participating Members of the Alliance and Global Automakers voluntarily adopted Privacy Principles that will govern data retrieved from vehicles.