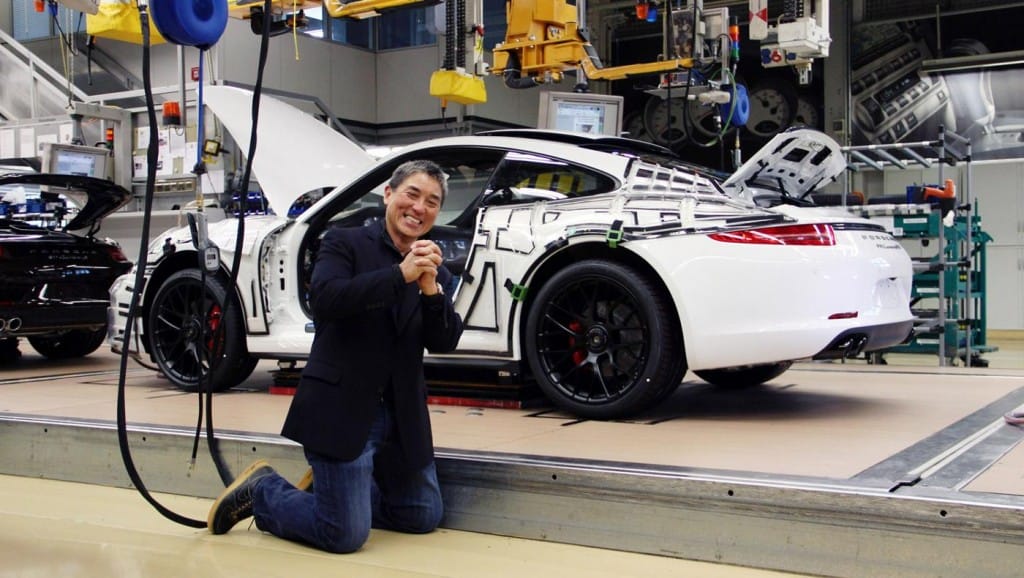 Silicon Valley is busy trying to work with Detroit for CarPlay and Android Auto or making its own cars. Apple is hiring employees from BMW and Google is working on self-driving cars. Cars have over 100 ECUs and they can connect to the Internet, traffic infrastructure and each other. Why not have a meet and greet with a Silicon Valley icon and an automotive sports icon?

We are seeing more convergence of Silicon Valley when we see the social media guru Gay Kawasaki on his knees grateful for a ride in Porsche 918 super plug-in hybrid sports car. It looks like he’s saying “Please give me a Porsche 918″

My favorite picture from my Porsche visit pic.twitter.com/B1mipMCgXb

Kawaski was invited by IT consultants and Porsche subsidiary Mieschke Hofmann und Partner (MHP), to visit to the main Porsche plant in Zuffenhausen. He “exchanged views” with Porsche executives on how the digital world will influence the automotive industry. Kawasaki is the only guy without a tie.

Can you tell who isn’t an exec at a large German company? 🙂 2nd from the left is the CFO of @Porsche pic.twitter.com/gVO6fkXa5r — Guy Kawasaki (@GuyKawasaki) April 22, 2015

Porsche appears to be listening to the man who marketed the first Apple Macintosh computers, because they were ready with their Apple Watch app on the day the watch come out, Friday. Porsche has been added to list of automakers that will offer Apple CarPlay in the future.

Kawasaki is so enthusiastic about Porsche on Twitter he says “Spread some of my ashes around Stuttgart when I die.”

Spread some of my ashes around Stuttgart when I die. Pictures of my visit to @Porsche : https://t.co/0Bz8e5lIum pic.twitter.com/Z0zgadf9Ak

It looks like he gave a standard PowerPoint style presentation with an new social media Twist. He broadcast it via Periscope.

During a tour of the 918 Spyder plant, Kawasaki, saw how the model is made and he was taken for test ride. Kawasaki sees cars in the future will not only not only have car-to-car communication, but will also communicate with the road, the cloud, other drivers and more.

In the video, Kawasaki shot of his test drive it’s really hard to see what’s going on because he shot it in portrait mode. He was probably asked to visit the factory because of so many Twitter and YouTube followers. The video has been viewed 555 times on YouTube as of this writing.

In 2013, Kawaski joined Google to advise them with Motorola smartphones. He was responsible for the “design your own” Motrola X concept. He wanted people to be able to pick the color and designs of their smartphones like they do their cars. Sales of the Motorola X were disappointing. Google sold Motorola to Lenovo, last year and lost money for the two and half years it owned Motorola.

The MSRP  for a Porsche 918 starts at $845,000. The Porsche 918 can be configured with 10 colors. For only you $63,000 you can add special colors of liquid metal silver or liquid metal blue. Seat Belts with Accent Stripes in Orange Exclusive are $1,800. Carbon Floor Mats with Orange Piping Exclusive are $1,725. It’s such a deal because some calculate a saving of about a half-million bucks compared with its Ferrari and McLaren contemporaries. On top of that you can save on the prices of gas by plugging it into an electric charger!

It’s the perfect car for a Silicon Valley billionaire who wants to show that he cares about the environment for Earth Day, even if it doesn’t have CarPlay.

Porsche has close to 10 million Facebook fans. The question is do they really need Kawaski to like them or does Kawasaki need them to like him?