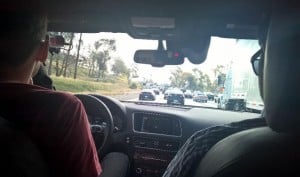 As the self-driving Audi SQ5 powered by Delphi drives itself through Los Angeles, we thought it would be interesting to see what people really want in a self-driving car and what they want to do while not driving.

We know that some of the self-driving engineers Tweet and use social media while the car is driving itself.

There are many other things that drivers who become passengers can do as technology takes over driving tasks and they are suggested in a survey from Carnegie Mellon University (CMU). CMU is the birthplace of autonomous vehicle (AV) technology, with a 30-year history of advancing self-driving car technology. Many of its graduates now work for self-driving projects such as at Google. Chris Urmson head of Google’s self-driving car program is a Carnegie Mellon Ph.D.

CMU conducted a study asking 1,000 people aged 17-70 what they would like in self driving cars and how it would change their lifestyles. The survey also asked what the non-drivers would be doing.

The most wanted feature “self-adjusting performance based on weather conditions,” ranked higher with people aged 36 to 70.

The youngest respondents (18-24) and the oldest (66-70) at 64% were closely matched in wanting cars that can find elusive parking spots.

More Screen Time for the Millennials:

When it comes to wanting TV or computer in the dashboard, virtual valet and an active visual display of car safety features, 18 to 24 year-olds want these options more than other age groups.

What else do people want to do in cars?

How Safe is Self-Driving?

Those under 35 think that self-driving cars will make daytime driving and taxis safer.