The Chevy Volt received the highest owner-approval scores of any car in GM’s history and a new model is coming in the 2016 Chevy Volt in the second half of 2015. Our review found the 2015 Chevy Volt to be an excellent “mash-up of an electric compact car with luxury connected mid-sized car high-tech features and ride.” To decide whether you want to buy a Chevy Volt now or wait for the 2016 model depends on some criteria and personal preferences.

The difference between the models is the electric driving range, current Chevy Volt models on a full charge can go 38 miles while the newer model will go 50 miles and a total driving range of more than 400 miles between fill-ups with regular gas while the 2015 requires premium gas.

The distance you drive on daily basis before you have to charge the Volt will help determine your choice. Those who know their commute is 49 each way may sway toward the 2016 model.

Chevrolet met once a month with a customer advisory board of 12 owners from across the country to understand how consumers were operating their Volts and listened to their suggestions.

The most appealing new feature for people with children is that the 2016 Chevy Volt backseat will seat three. The 2015 Chevy Volt has two rear seats with a space in the middle to see out the back. On the other hand, for many car buyers the amount of seating in the backseat doesn’t matter.

Some people don’t like the Star Trek style buttons on the 2015 center stack. The 2016 Volt center stack promises hard controls for climate control, and a more intuitive interface. Images show MirrorLink and CarPlay compatibly in the 2016 model while 2015 offers Bluetooth, Pandora and Stitcher apps. Although some may think they have to be Mr. Spock to navigate the 2015 system, after a while we found that using the steering wheel buttons for music and phone connections was the easiest. The Bluetooth functions of the 2015 Volt were exceptional and a major feature wanted by many car owners. If you are total tech geek who demands the latest technology, you may want to wait for the 2016 model.

The two screens on the 2015 Chevy are 7-inch screens and the 2016 model has two eight-inch-diagonal screens. 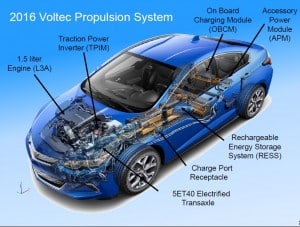 more of a conventional plug-in hybrid because the engine torque is sent to the wheels through a mechanical connection whenever the engine is on. The 2015 Volt is an extended range EV, the gas engine does not directly power the wheels.The sound of the engine may change with the new configuration. The engine of the 2015 hums the same in gas mode for all speeds. The four cylinder gas energy engine in the 2015 Volt powers the electric drive when you run out of battery charge.

A major difference between models is the style of the bodies. When the 2016 Chevy Volt was announced, it was called a stronger more muscular body including active grille shutters to help balance design with efficiency. The 2015 Volt has an aerodynamic wind dam that does rub the ground when pulling out of driveways. The dam is higher on the 2016 model.

In the 2016 Volt the Regen on Demand feature enables driver control of energy regeneration via a paddle on the back of the steering wheel. There are no Regen settings on the 2015 Chevy Volt for regenerative braking that worked better by braking with toes with the heel on the floor.

Both models come with OnStar services (3 years for the 2015, ?years for the 2016)  and 5 years of OnStar RemoteLink start with a trial of fantastic fast 3GB of Wi-Fi hotspots with excellent coverage.

The price of the 2016 Chevy Volt has not been announced yet. Since January, the prices of EVs have been dropping over last year due to the lower price of gas. After looking at TrueCar reports we saw a price drop of $7,000 for a 2014 Chevy Volt. GM stopped production of the 2015 Chevy Volt.

Worried buyers will be in waiting mode until announcements are made. We suspect that in the next few months Chevy Volt 2015 inventory will be cleared and discounted. If you currently don’t have vehicle the price drops may be very appealing, especially if you don’t drive far.

TrueCar Average Transaction Price averages have been lower for electric cars due in part to the lower price of gas. 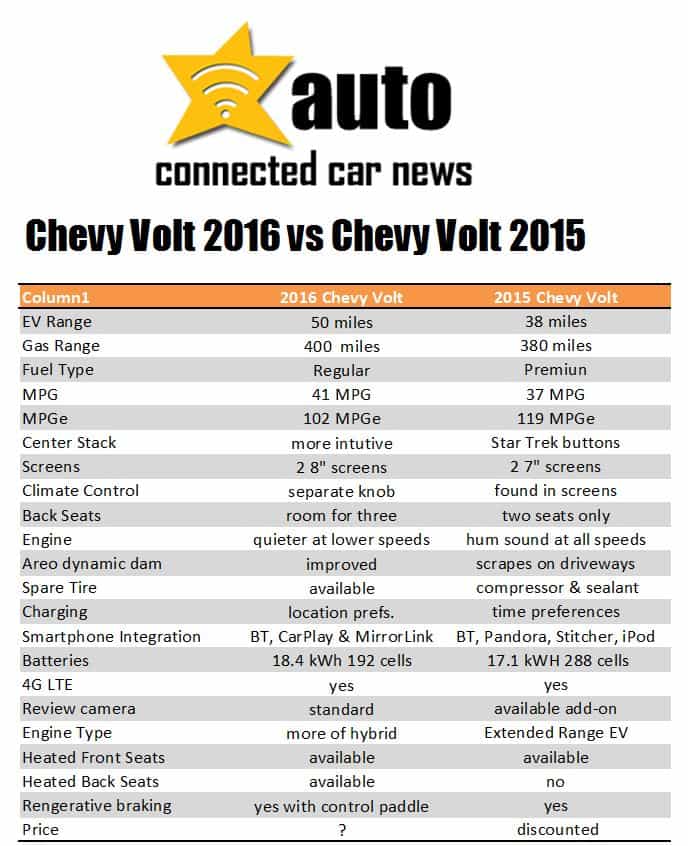