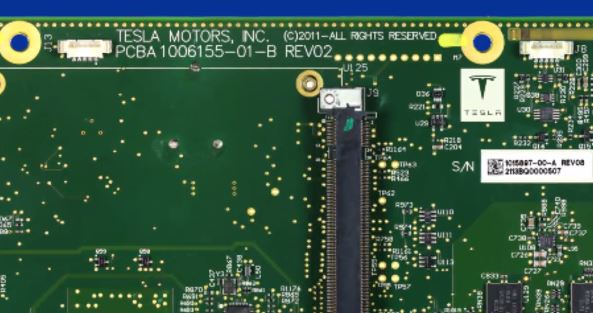 IHS is known for tearing down smartphones and tablest to find out how much they cost to make and analyse  its suppliers.

IHS recently tore apart a 2013 Telsa Model S, and found that the Tesla S is more like a giant iPad than traditional vehicles.

IHS broke the car up into parts to figure the suppliers and how the car works.

Everything that was accessible in the car was torn out.  Displays are the most expensive part of the car whichs costs about the same as television or computer.

Tesla’s virtual instrument cluster is centered on a 12.3-inch diagonal 1280 by 480-resolution LCD from Japan Display Inc. (supplier for Apple’s iPhone 6 and 6 Plus).

Circuit makers are Freescale, TI and others  for mutiple MCUs. There are many modular control units for various functions, doors, lift gate, and climate control.

The circuit boards have the name Tesla on it, made specifically for Tesla.  Typical car makers use boxes from Tier One suppliers.

The Modular Controls Units and circuit boars are being built for Tesla.  Many of the employees are from electronics and are designing the car the electronics are designed. It appears that generic modules can be programmed for different functions.

The battery is the biggest ticket item due to sheer quantity. The battery pack weighs about 1500 pounds. There are 14 battery packs. The battery  tray is the size of a row boat with water cooling.  A mother board controls the batteries.

There are power electronics gears that drive the motor that have “mystery goo” on it, which is believed to keep the processors cool.

IHS bought the vehicle at auction after a car accident, the electronics were in tact. The rear left wheel and power train were cracked. The dismantlers worked on the car for weeks. In order for such a car to be sold as salvage it has to very expensive to fix and severely damaged.

The price of salvaged Telsa S can be as much as $50,000, as was the caue for San Diego man who is having trouble getting Telsa to sell him parts and repair the vehicle without signing a waiver. We checked salvaged prices to see severely damaged Tesla S priced from $35,000 – $65,0000.

IHS noted in other reports that in the Model S, the use of HSPA+ technology allows Tesla to offer a connected telematics with internet access, online music, electric charging stations, live traffic information and Wi-Fi hotspots.